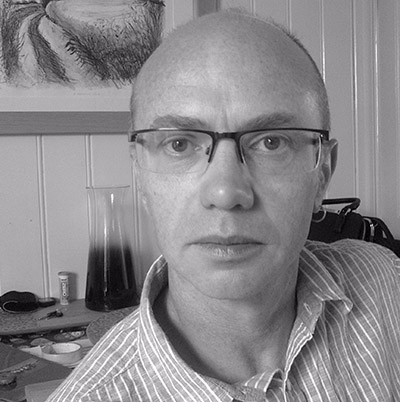 I wrote this book about ten years ago, partly as a response to the sudden death of my mother-in-law, who’d just turned sixty. Time, then, to get something down. But what?

I’d studied Keats closely at university, including the letters and Robert Gittings’ biography and had even written a poem about Keats’ arrival in Naples: to have gone through all that, only to be quarantined for another month. So, after a bit more research, I had my plot and also the ending, which I knew would steer clear of Rome, because Anthony Burgess had written a novel about Keats dying there already. Over a period of two years, in cafes and classrooms [empty ones], I gradually put together a series of scenes describing the journey to Italy. I chose third-person focalised narrative because that offered me both descriptive luxuries and the ability to explore voice/point of view. The hardest part was settling on dialogue that didn’t sound like botched Beau Brummell, so I tried to keep it as simple as possible, in contrast to some lusciousness over river-bank and ocean-wave.  In particular, I found I enjoyed writing about the Thames [five years’ hard labour in Grays, Essex helped] and about the sea, but the best sections for me, were from Miss Cotterell’s perspective, where I was free to invent a doomed personality, complete with back-story.

So all in all about two years. Handwritten in exercise books bit by bit then redrafted on computer – I reworked that opening section too much probably, rest less so, though did do some adjective removal [hard to believe]. And that was it. Then the usual redrafting, reorganising, bitter tears.

I am currently working on a novel about Nietzsche going mad in Genoa.