How did you get into becoming a book cover illustrator?
Well, there is no single way to become a book cover illustrator, but I do think that my own path was a little unconventional! I started my journey to becoming a book cover illustrator in the very traditional sense… Which was, of course, by studying for my Bachelor’s Degree in Theoretical Physics!
Before attending University, I was faced with the difficult decision between studying Physics and Mathematics, two subjects I was extremely fascinated by and passionate about, or attending University to further my knowledge and experience of the art world. I decided to study Physics but continue with my love of art in my spare time, and in that spare time at University, started up my own illustration company called Puffin Prints. It was from my experiences through Puffin Prints, creating my own art and illustrations and putting them out into the world, both online and physically by selling my work in local shops and galleries, and attending networking events, that I came to meet several individuals and companies that I started doing commission-based work for. Since graduating with my Theoretical Physics degree, the work I have been doing for Puffin Prints, amongst other things eventually led to my meeting Richard of Red Hand Books, who offered me the opportunity to illustrate my first book cover. As an avid reader of books and obviously, a lover of art, this was something I had always dreamed of doing!

What inspires you to create these sorts of designs?
Everything and anything. Living in North Wales, especially Anglesey, and being surrounded by nature and the unique inhabitants that do live here, I would say that the sea and marine life are probably some of the greatest sources of inspiration for me, personally. Sometimes I have ‘slump’ days where I flick through art and illustration books and browse Pinterest endlessly, and if it’s a really bad ‘slump,’ I head to the beach, to the sea, one of my favourite sources of inspiration, and get nothing. On another day, though, I can wake up and see a pattern in the paint on the ceiling and can’t get out of bed quickly enough to find my paints. I do think that inspiration tends to come in waves, which I think is quite apt, considering most of my work is, although sometimes subtly, inspired by the sea and nature.
I also love to experiment with new techniques, new media, and I’m always trying to grow as an artist, and so being given a brief is always inspiring, because more often than not, a brief can be something I’ve never tried before. I think that this is the way in which I work best, because I love a challenge!

Do you judge a book by its cover? How? What makes a great cover?
Instinctively, I’d like to say no to this question, because as a bookworm, I know that ‘you should never judge a book by its cover.’ However, as an illustrator, despite my best attempts not to, I think that inherently I do judge a book by the cover, at least a little bit. It’s the first impression of any book you will get, and as such I think there is a snap judgement when you see a book cover. They say that the first bite of every meal is with the eye, and I do think that this is true of a book cover too. I think the best book covers are those that leave a lot to interpretation. When I’m reading a good book, I disappear into the writer’s world, where all the characters and twists and plots are taking me on an adventure, and to me, it’s a very personal thing. You are drawn in and immersed and have your own imaginings of the way the book’s universe is built, the way a character looks and how their mannerisms are portrayed. From this, I think that the best book covers are those in which the reader can draw their own conclusions from it, and interpret the story in their own way.

What advice would you have for young aspiring book illustrators?
Never stop drawing. Draw every day. Paint as often as you can. It can be intimidating, I think, especially with social media and the online community as an added pressure, to practise for yourself, for personal improvement. I find that when I draw or paint something, there is an internal pressure to share it, post it online for feedback, and because of this, I often have found myself hesitant to paint at all, because if it isn’t good enough to share, then there was no point in beginning in the first place. This is a dangerous mindset to fall into and I think a very good habit to get into is sketchbooking. Keep a personal sketchbook for practising and experimenting, and make it a habit to use it every day, even if it’s only for a few minutes, and don’t share everything you do. Practise to learn and grow for yourself, and not for your social media.

What sort of background or training do you need?
I don’t think that there is any particular training necessary, and as for background, I think it largely depends on what sort of thing is required. Personally, I am self-taught, I did a few art classes in school but most of what I have learnt is because I wanted to know how to do it, and so I spent a lot of time playing around with different media and computer software in my spare time. I don’t have any professional or academic training, but I am really passionate about what I do, and I think that in itself is worth a lot.

How do you see your career going in the next few years?
I’ll be very pleased if things continue at the same momentum as they are currently!

What inspired you to create that beautiful image for The Reputation?
The image for the cover of The Reputation was inspired by the book itself, as well as being heavily influenced by the work of Munch. Using deep colours and dark tones, I was trying to convey the sense of brooding and perhaps a hint of regret. Using the imagery of the man hunched and crumpled on the floor, I was trying to symbolize a broken man, whilst keeping him anonymous by keeping his features quite vague and as I said previously, open for interpretation. The dark cliffs in the background could be a representation for a lot of different things, but to me personally, I wanted them to appear quite daunting, particularly in comparison with the man in the foreground, curled up on the floor, a stark contrast.

Do you think there is (or has to be) any link between the cover and the content of a book?
While I don’t think there has to be, I think it certainly helps, because a book cover should be a representation of a book, or a single interpretation. However, I have known examples of the book cover being only very loosely related to the book’s contents, or perhaps signifies an emotion evoked by the book.

What’s your favourite book cover? What’s your favourite book?
One of my favourite book covers that I remember even now, from reading it when I was quite young, is the original book cover for ‘Inkheart,’ by Cornelia Funke. The book is about a special family with the ability to read fantastical books aloud and have the stories and characters seep into their reality, and the chaos this causes. The cover is a beautiful, magical depiction of a window into what is presumably a fantasy world, with fairies and other creatures escaping onto the cover, as well as a hand gripping the edge of the window, in an attempt to escape. I think this both represents exactly what the story is about whilst simultaneously leaving a lot up to the reader, as well as the fact that it is created in an illustrative style reminiscent of an illustration from a fantastical book. This is one of my many favourite book covers though, I could probably talk for hours about book covers. I have so many favourite books, it really is very difficult for me to whittle it down to just the one! A favourite series of mine is ‘The Farseer Trilogy’ by Robin Hobb, another favourite of a similar genre is ‘The Princess Bride’ by William Goldman, which all fall into the realm of fantasy/fiction, but I also love non-ficton works such as ‘A Brief History of Time’ by Stephen Hawking!

How did you create the beautiful atmosphere of The Reputation? What’s going on here?
As I mentioned previously, this piece was heavily inspired by several works by Munch, and I was trying to capture an almost ominous feeling. I was trying to make sure that the cover didn’t look too defined, keeping a rough edge to it, and as such, I decided that acrylic paints were a good place to start. I painted the initial cover physically using acrylic paints and various techniques, such as gently scratching a layer of paint in a pattern on the cliffs to give them a more three-dimensional feel.

Once this was done and the paint had dried, I scanned it in to my laptop to do some work on the piece digitally, which I thought would create quite a nice contrast, as like I mentioned previously, I was trying to make the cliffs loom above what I was attempting to convey was a broken man. I painted the character in digitally, and tweaked some of the background and added some more texture to enhance the ‘rough edge’ quality I was looking for, as well as colour correcting and playing with the levels to get the desired look, and ever deepening the contrasting nature of the cover I had in mind. 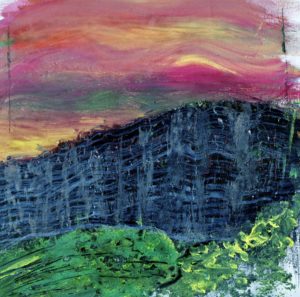 It was then time to add in some finer, subtle details, which are actually quite hard to spot if you don’t know they are there! I added in his cast-off shoes and broken watch, again a symbol of who this character once was, compared to who he has become. I wanted this to be very subtle and only visible if you were studying the cover quite closely, so I hope I achieved that! His being barefoot is again a subtle symbolism of his vulnerability. 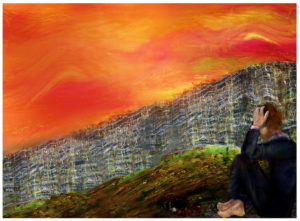 Once all the pieces of the composition were in place, and this is the bit I find most difficult usually, I went over everything with a fine tooth comb. Changing angles here and there, nit-picking and going over everything and trying to make sure the anatomy is correct, the lighting and shadows are in the right places, lots of little details that seem inconsequential, but without them, everything would very likely look a bit strange…After a few back and forth tweaks and corrections, it’s done. It’s very hard to summarize what can be hours and hours of work into a description of what is going through my mind at the time, because I tend to do things quite instinctively when I’m working! I seem to zone out into an intense concentration on what I’m doing, and it’s a mystery even to me what I’m thinking when I’m painting. It’s a very exciting process though, as well as a challenging one, and I just hope I did the fantastic book justice!