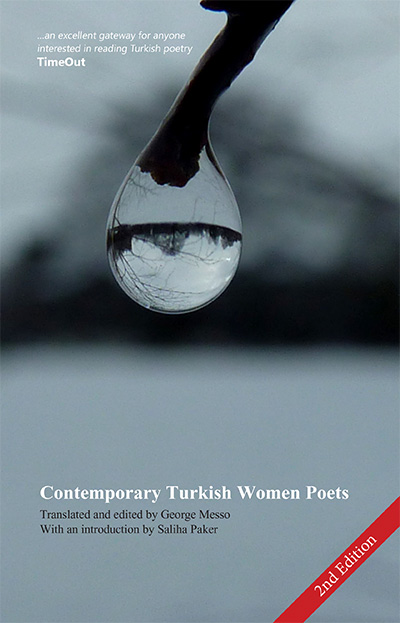 In recent decades Turkish women have risen to extraordinary prominence in a literary culture once dominated by men. Contemporary Turkish Women Poets is the first comprehensive survey of these startling, vibrant developments. In his landmark anthology, poet-translator George Messo gathers twenty-two of Turkey’s leading, award-winning poets, writing at the very height of their creative powers. Collectively, they represent more than half a century of innovation and change, embodying one of the most sustained and compelling re-visionings of contemporary poetry for many years.

With an introduction by the translator-scholar Saliha Paker, Contemporary Turkish Women Poets offers a uniquely challenging and irresistible encounter with some of the most dynamic poets writing today.

In Sennur Sezer’s ‘documentary narrative’ Mihrî Hatun, a Turkish Sappho the author reconstructs the life and times of Mihrî (c.1460- 1506), an Ottoman woman who achieved unusual recognition as a poet in the late fifteenth century, but who was only brought to the modern reader’s attention within the last few decades.

In The Age of Beloveds: Love and the Beloved in Early-Modern Ottoman and European Culture and Society (2005) Walter Andrews and Mehmet Kalpaklı too discuss Mihrî, focusing on ‘the problem that the woman poet presents for both Hafezan (Persianate) and Petrarchan poetry’ – forms almost entirely dominated by men. Offering invaluable insight not only into the gender politics of poetry of the sixteenth century but also of our very ‘modern’ times, they write:

The beloved’s power is always what the early-modern (/male) poet perceives as feminine – no matter what the beloved’s actual gender. That power lies in withholding, denying, inaccessibility, veiling, spirituality, silence, modesty. The beloved acts, if at all, only in the most subtle and ambiguous gestures – the shy glance, timid coquetry. Active love is the masculine role. It is passionate, suffers publicly, speaks aloud. It reveals the beloved and creates the beloved’s image by tearing away veils of modesty with gusts of description, making the beloved present to the gaze of the world. Thus, unless the object of her passion is God and, by extension, her own (holy) virtue, the woman poet is taking a man’s part and leaving the male poet in a quandary. Either becoming a poet is the same as abandoning the (supposedly) female virtues, or presumed gender distinctions and categories no longer hold…