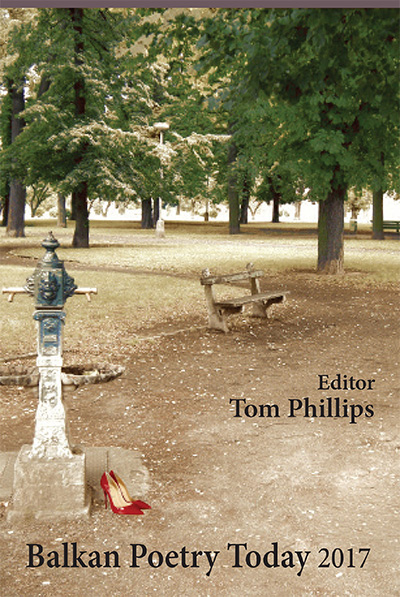 Featuring the work of more than 30 poets from across SE Europe, Balkan Poetry Today 2017 offers insight into the rich and diverse poetries of a region that has only sporadically emerged onto the literary radar in the English-speaking world. Established writers sit alongside those from the latest generation to add their voices both to the region’s poetic traditions and world poetry in general.

Balkan Poetry Today is edited by Tom Phillips, a poet, playwright and translator from Bristol in the UK who has worked closely with writers and artists across SE Europe for much of the last decade and is a published poet in Bulgarian.

In his editorial comments at the opening of this first issue of a new magazine, Balkan Poetry Today, Tom Phillips stakes out his purpose with clarity and determination:

“Balkan Poetry Today is not designed to be a comprehensive survey. Nor is it a ‘greatest hits’ package. Not every country in SE Europe, not every language spoken there is represented in this issue (although many are) and readers already familiar with those few poets from the region who have been translated into English may wonder at some of the more notable absences. This, though, is a magazine, not a representative anthology, and our policy has simply been to publish the best work which we have been sent or otherwise come across rather than to fulfil the more ambitious task of charting an entire region’s poetic output.”

This is the beginning of an adventure and it carries with it the momentum of a serious journey. That setting of keel to breakers reminds me a little of J.H. Prynne’s ‘Tips on Translating Poems (Into or Out of English)’ which he wrote in Cambridge a little over ten years ago. The last of the 24 tips pointed to the importance of recognising that no translation work is ever fully completed since there “can never be a best or a right solution”. He reminded his readers that the best kind of poetical translation of a poem is another poem, “without any didactic extras” so that the reader “will be rewarded by enjoyment of a good poem which gives a strong experience of its foreign original”. Prynne concluded that this was the aim of all poetical translation and that it allowed the efforts of the translator “to bring very real benefit in understanding between cultures”.
This last point is one which was highlighted by Ana Martinoska in her introduction to the 2011 Arc publication of an anthology of Six Macedonian Poets in which she commented that “there are no nations or literatures that are small, insignificant or culturally less important than others” and that every culture and genre “should be presented to a broader audience without hesitation or fear of marginalisation”. Prynne’s last comment in his tips was “Translation is noble work!” and Martinoska referred to the translation of poetry as being “one of the best forms of cultural representation, as mediation among languages and nations, cross-cultural and inter-cultural communication bringing the world closer together, both in time and space”.
With this last statement in mind it is refreshing and heartening to read Tom Phillips’s words:

“It is, of course, conventional for any publication with the term ‘Balkan’ in the title to attempt a definition of the region. BPT has adopted a rather loose one with blurry edges – and one which includes the various and not inconsiderable Balkan diasporas. We are, in fact, pretty much leaving it to the poets themselves to decide whether they identify themselves as Balkan or not and to define where the cultural, geographical and linguistic boundaries lie. In practice this means that in this issue you’ll find work by a Romanian poet who writes in Czech, a Bulgarian who lives in Slovakia and a Croatian who writes multilingual poems in Croatian, French and English. In future issues we hope to publish work in transnational languages like Roma and Vlach. We use the word ‘Balkan’ in the broadest possible sense and with no intention of suggesting that ‘Balkan poetry’ exists as a single, homogenous entity.”

This first issue of an exhilarating new journal is sheer delight and one of the first poems that drew my attention immediately was ‘Private lessons in May’ by Aksinia Mihaylova (translated by Roumiana Tiholova):

“I’m trying to teach you the Cyrillic alphabet of scents:
that the geranium on the balcony across the street
is more than a mere geranium,
that the linden tree in June
is more than a mere tree,
but we aren’t making progress fast enough.
Your thumb is following the candle shadow
that the wind is making tremble on the open page,
as if drafting mobile borders
between you and me,
as if to protect you,
as if you are that boy,
who once lost his watercolours
on his way home from school,
and who’s still painting
the lost sky of his childhood and the hills
in the same colour.”

In 1923 William Carlos Williams had been convinced that “so much depends / upon // a red wheel / barrow // glazed with rain / water // beside the white /
chickens”. Wallace Stevens was to refer to those words as a “mobile-like arrangement” and Hugh Kenner suggested that they dangled in equidependency, “attracting the attention, isolating it, so that the sentence in which they are arrayed comes to seem like a suspension system.” The delicate movement in Mihaylova’s poem traces the act of translation itself, the spaces between one mind and another in a world of “mobile borders”.

Balkan Poetry Today is available in a limited edition print version via the Red Hand Books website: http://www.redhandbooks.co.uk/ and an e-book version will be available soon.

In a world of narrowing confines this new journal is refreshing: it opens doors on each page.